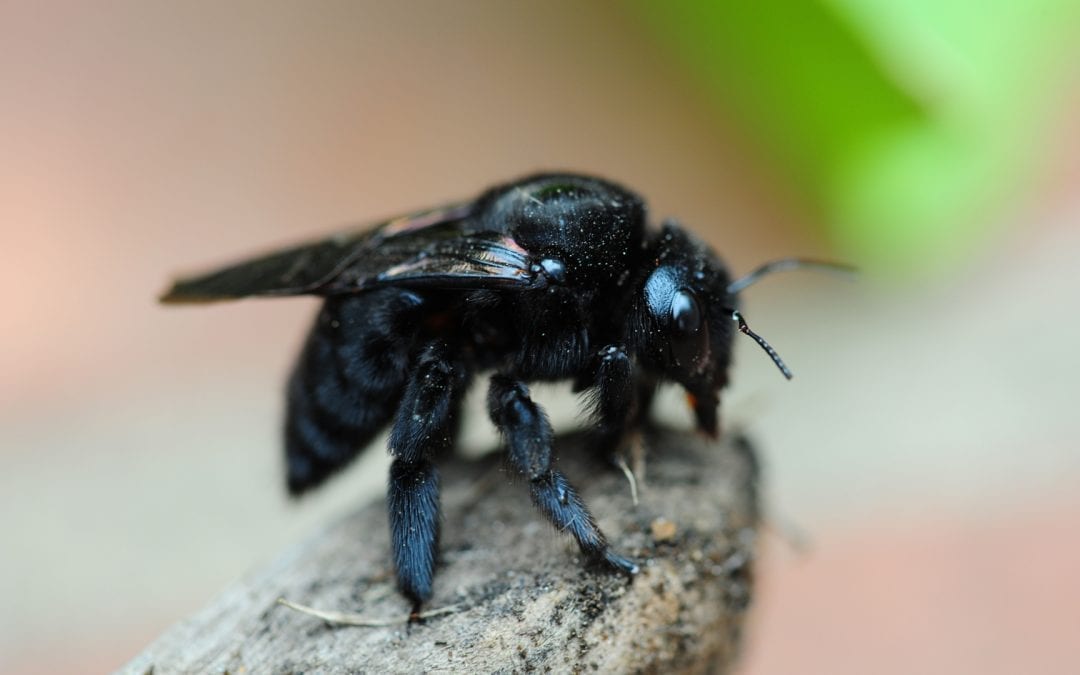 While there are several species of wood-loving insects that cause merely cosmetic damage, the worst insects to watch out for are those that carve into wood or use it for nesting. Carpenter ants and carpenter bees are two such common wood-destroying insects. Knowing what they like and what to look for can help you spot them and eliminate them before they cause costly damage.

Early detection of common wood-destroying insects can protect a home from damage. One of the biggest threats to a home’s structural integrity comes in the tiny form of pests that live in or consume wood silently and invisibly. They can be anywhere from the rafters of the roof down to the foundation. Carpenter ants leave wood shavings outside their nests. Carpenter bees leave holes that are nearly perfectly round and hover near decks, eaves, and siding.

Carpenter ants love rotting wood for building nests. They are often found in damp spots such as around dishwashers or sinks, in basements, near window sills, and leaky pipes. These pests are most often found in northern states and can be seen when they are out and about in the home to forage, largely at night, seeking food and water. They are particularly fond of fat, sweets, and protein.

There are several different clues to the presence of carpenter ants. In spring, look for swarmers. At other times, piles of frass, or mixtures of wood shavings and fecal matter, give away the nesting sites. A large enough nest might produce rustling sounds you can hear. They are most likely to cause damage by their tunneling in key timbers, which can cause serious structural harm.

Carpenter bees look somewhat like bumble bees, but their behavior is entirely different. First, they are solitary insects. Also, the males can show territorial behavior and hover aggressively in front of anyone who gets too close to a nest; these actions are strictly for show as male carpenter bees lack a stinger. Females do have rather potent stingers but seldom use them.

Another species that likes to make its nest in wood, the carpenter bee is prevalent in all regions of the United States. They prefer unfinished wood where they drill entry holes that are almost perfectly round and range from one to two inches in diameter. This hole leads to the tunnels where eggs are laid.

These wood-destroying insects are less likely to cause any drastic structural damage, but their entry holes can allow the entry of moisture into the wood, which leads to further problems than just the holes themselves. Still, it is best to keep an eye out for them where they tend to linger near siding, decks, and eaves.

Keeping an eye out for the carpenter culprits is an important part of home maintenance.  Be vigilant and aware of the symptoms and able to recognize the creatures that create them, and you can keep a house secure from structural threats.